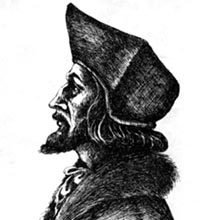 The name John Hus is not well known to many modern day non-Reformed Protestants but perhaps we can think of Hus as the proto-type Martin Luther. Indeed, much of the situation was the same with Hus as it would be with Luther except the catalyst for Hus seemed to be the turmoil being caused by men who were competing to claim the office of Pope. Hus, the master of Charles University in Prague Czechoslovakia at first attempted to remain neutral in the fight but as time went on it was looking more & more like the entire papal system & perhaps Roman Catholicism itself was a wrong representation of Christianity.

Hus drew heavily from the English Reformer, John Wycliffe, sometimes preaching Wycliffe's writings verbatim. Hus continued to become more bold with his admonishment of the Church, bringing up the same objections uttered by Wycliffe & that would be uttered by Luther over 100 years later. With an eery parallel to Luther's trial before the Emperor, Hus was also invited to come make his case before the Emperor but unlike Luther Hus ultimately was not protected. Even though the Emperor protested, Hus was arrested & imprisoned by the Church authorities.

During the lengthy trial where Hus was not allowed to make a defense but only to recant, even the Emperor eventually thought it more acceptable to put Hus to death for the sake of peace. Hus would be burned at the stake in 1415, yet the Reformation could not be thwarted.