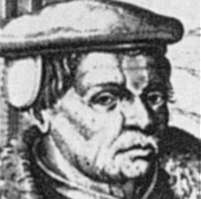 As even in our own day so too during the Reformation did some men not only want to reform or fix broken aspects but some men desired to uproot everything & create whole new concepts which they claim are a return to the "primitive" or first-century Church. Some of these men & groups during the Reformation were Andreas Karlstadt, Thomas Muntzer, the so-called Zwickau prophets, & perhaps to some degree the early Anabaptists.

This element of the Protestant Reformation is sometimes called the "Radical Reformation" & were highly apocalyptic in their teachings. Another aspect common with the radcials was a bent toward anarchy.

Karlstadt had a direct link to Martin Luther as Karlstadt was the archdeacon of the Theology Dept. of the Wittenberg University where Luther studied. Karlstadt was the man who introduced Luther to the writings of Augustine & awarded a doctorate to Luther.

Before Luther would take his historical piligrimage to Rome which would in turn spark Luther to write his 95 Theses, Karlstadt also went to Rome & returned to write a 151 point theses against the corruptions of the Roman Catholic Church.

Karlstadt also (as is little known) during the Reformation published the most German pamphlets second only to Luther. Karlstadt's pamphlet's appealed even more to the common man than did Luther's.

Distinguishing aspects of Karlstadt's teachings are:

Karlstadt's influence on Luther, the Zwinglians, the Anabaptists & the Reformation as a whole is greatly under appreciated.

Thomas Muntzer unlike Karlstadt did not have any original direct link to Luther though was influenced by the teaching of Luther & Karlstadt during his stay in Wittenberg from 1517-1519. In 1519, Luther did recommend Muntzer to be a pastor in a church at Zwickau Saxony. However, within a year authorities in Zwickau expelled him from the city. Muntzer like the other radicals (aka "enthusiasts") was apocalyptic & even fancied himself as the "new Daniel".

Muntzer was initially received in the various cities to which he traveled but once his teaching became known (especially as it differed with most of the Reformers), he was quickly ran out of town. After several attempts to set up a communistic theocratic government in the various towns to which he traveled, Muntzer along with his companion Henry Pfaiffer was successful in setting up their idealic yet fatalistic government in the town of Muhlhausen from which Muntzer led 8000 men in a battle against "political & spiritual oppression" -- this battle was the waning battle of what had been part of the "Peasant's Revolt", a temporary class war sparked not only by radicals such as Muntzer but even unwittingly precipitated by the teachings of Luther & other Reformers. Muntzer's army would be defeated & he would be beheaded.

Distinguishing aspects of Muntzer's teachings are:

Muntzer seems to be an example of what happens to men who fancy themselves lone-wolf Reformers, wanna-be prophets (Daniels) that try to implement their agenda without consultation with the Church at large. Indeed, an example of the dangers of simply uprooting everything as if God isn't sovereign & hasn't the ability to lead His Church through the course of history even where it seems the Church is failing.

The so-called Zwickau prophets were comprised of Nicholas Storch, Thomas Dreschel and Mark Thomas Stübner. Their teachings were similar to Muntzer (as they received much from Muntzer's time in Zwickau) & had influence on Karlstadt. The Zwickau prophets much like modern "mystics" reject intellectual-based theology to the point of advocating that the study of theology is a form of idolatry.

Hearing of the exciting reforms going on in Wittenberg, Storch & Stübner traveled there while Luther was hiding from the Roman Catholic authorities in Wartburg Castle. The Zwickau prophets were able to influence Karlstadt wherein Karlstadt took on himself more of the apocalyptic tone. Shortly after, Luther returned to Wittenberg & was able to refute the "spiritualizing" of the Zwickau prophets by instead teaching the supremacy of biblical authority -- Scripture is the only guide to God's nature, character, & will. After this defeat, the Zwickau prophets moved on, teaching their proto-pentecostalism to other towns.

Distinguishing aspects of the Zwickau prophet's teachings are:

It is clear that the Zwickau prophet's were the forerunners to "inner-light" anti-theological Christians even of our own day who have disdain for theological learning.

The origin of the group called the Anabaptists is often debated but one thing that can be said, is that they clearly were either influenced by or shared common views with men such as Karlstadt, Muntzer, Storch & other "radical reformers". The Anabaptists typically came from the lesser to non-educated class of people & thus the anti-intellectualism message of the radical reformers was appealing. Without the need to rely on actually reading the Bible, Anabaptists could hold a mystical, spiritualized faith.

We know the descendants of the Anabaptists through such groups as the Amish, the Quakers, the Mennonites, Seventh-Day-Adventists, some Baptists, & even some elements of the so-called Emergent Church.

Distinguishing aspects of the Anabaptists teachings are:

Much of the Anabaptist mindset can be seen in "anti-biblicistic" Christians today who advocate "experiential" or "relational" Christianity over a solidly Scriptural & theological Christianity. Anabaptistic concepts still seem to appeal to persons either too lazy or too uneducated to actually handle the Word of God. -- I do not mean this to sound arrogant as I too do not believe faith is solely an intellectual matter, yet having a relationship, be it with a mortal person or Christ does require an amount of knowing the character, nature, & will of the object & for Christ that only can be known via the intense reading of Scripture.

So, I leave it to the reader to decide if these men were rebels or reformers. Did they contribute worthwhile to the over all advancement of the Christian faith or did they detract from it?