What is the Preterist View of Bible Prophecy?

Is the End of the World near? Are we living in the Last Days? Is Christ's return at hand? For 150 years here in America we have constantly been told we were living on the threshold of the end of the world and Christ's return. Prediction after prediction has failed to materialize, and false hope after false hope has been foisted upon the Christian community. Many Christians have been disillusioned, and are already looking for more reasonable explanations. Some have been so disillusioned they left the faith altogether. And the secular media (who are always looking for an excuse) are further discrediting Christianity because of it. Something is terribly wrong with traditional views of Bible Prophecy. There is a serious need to re-examine the whole issue of Last Things.

Bible prophecy can be understood, but Futurist views have fallen far short for many reasons: their extreme physical/literalizing approach, their seeming inability to distinguish between figurative and literal language, and their failure to properly take into account the historical-grammatical-cultural context of the prophecies (specifically what they meant to their original audience).

Even the most difficult prophetic passage comes alive when approached properly. It is time to look at some alternatives, and the Preterist view is a great place to start. 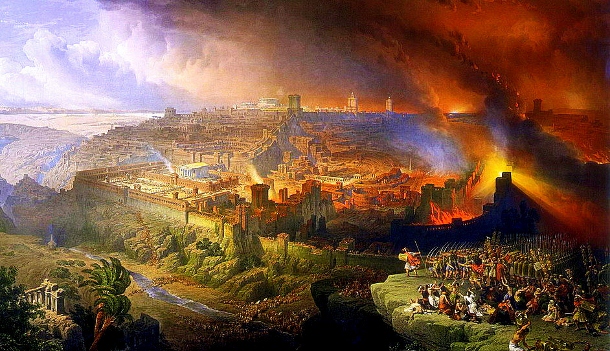 David Roberts painting of the destruction of Jerusalem in AD 70.
"He takes away the first that He may establish the second."." ~Hebrews 10:9 NKJV
"But you have come to MountZion and to the city of the living God, the heavenly Jerusalem" ~Hebrews 12:21-22 NKJV

"Preterist" means past in fulfillment, and "Futurist" means future in fulfillment. Preterist basically means the opposite of Futurist. Futurists believe most end-time prophecies (especially the big three major ones - Parousia, Resur., and Judgment) are yet to be fulfilled. Preterists believe that most or all of Bible Prophecy (especially the big three events) has already been fulfilled in Christ and the on-going expansion of His Kingdom. Most Futurists do not really believe Christ has been successful yet in fully establishing His kingdom.

The "Preterist" interpretation of Bible prophecy has been mentioned several times in publications such as Christianity Today, Christian News, Great Christian Books catalog, World Magazine, and several others. There is already at least one daily radio program teaching from the preterist perspective and several monthly and quarterly publications. Scores of preterist books, tracts, video and audio tapes have been produced and many more are on the way. It is beginning to capture significant public attention, and is "spreading like wildfire" at the grass roots level. It is compatible with the essential beliefs of all Christians, and is already represented in nearly all Protestant denominations and the Roman Church.

When will Christ return? This question is relevant, and can be answered by scripture. Jesus seems to have answered it very clearly in these passages (Matt. 10:23; Matt. 16:27,28; Matt. 24:34). Ever wonder why the First Century Christians expected Jesus to come in their lifetime, and where they got this expectation from? Take a look at the extreme sense of imminency in these passages: James 5:8,9; 1 Pet. 4:7; Matt. 10:23; Matt. 16:27,28; Matt. 24:34. These verses have always troubled Bible students, and have been used by liberal theologians to attack the inspiration of Scripture. They reason that these passages were not fulfilled when they were supposed to be (the first century generation), so Jesus and the NT writers failed in their predictions and were therefore not inspired. But these verses point to Christ's coming in some sense in connection with the Fall of Jerusalem at 70AD. So, Jesus' predictions were fulfilled. He did not fail, nor do we need to engage in theological gymnastics to try to explain-away the seeming delay or postponement of His return. It happened right on schedule. Many knew the destruction of Jerusalem in 70AD was important in God's scheme of redemption, but never understood its full significance. It has to do with the consummation of the plan of redemption. The final events of the redemptive drama came to pass in the first century within the apostles' generation (before A.D. 70). Christ's kingdom is here now. Paradise has been restored in Christ (spiritually-speaking).

Christ has conquered all His enemies and has given us the Kingdom.

This view offers a much more positive and realistic worldview. It is conservative, consistent, optimistic, responsible and accountable. And it robs us of no motivation for either living the Christian life, or evangelizing the world. In fact, it's the only view which gives us a consistent reason for being constructively involved in making the world a better place for the long-term, unlike the short-term escapist and withdrawal mindset of most futurists.

Bible prophecy absolutely makes sense when approached from this past-fulfillment (preterist) perspective! It puts emphasis on the spiritual nature of God's Kingdom, not on the physical, materialistic, sensual, and sensational. It teaches a realized spiritual salvation in Christ and the Church now, instead of a frustrated hope for a postponed sensually-gratifying paradise way off in the future. It has an optimistic worldview that gets involved, makes a positive difference, and lights a candle, rather than cursing the darkness, longing for a rapture-escape, or retreating from society. It doesn't engage in wild-eyed speculation like futurist views. It's just simple, straight-forward Bible interpretation.

Some of the great theologians and scholars of the last 300 years have suggested the preterist view for consideration, but traditional Christianity was too caught up with the idea that the Pope was the Antichrist or some other such Futurist notion. But that has changed. We are not as gullible now as they were when William Miller, Darby, C. T. Russell, Rutherford, Scofield, Walvoord, and Hal Lindsey came along. A constant barrage of false predictions has made us more wary.

Most Christian theologians in Europe a century ago took a somewhat preterist approach, and none of them considered it unorthodox. One of the leading proponents of the preterist view back then was James Stuart Russell (not to be confused with the Jehovah's Witness founder with the same last name, Charles Taze Russell - there is no relation). J. S. Russell (1816-1895) published a book in 1878 entitled, The Parousia. We here at IPA recently reprinted it. Some leading theologians and Christian spokesmen have had the following to say about the book and the preterist view:

Many who never knew anyone else took the preterist view have independently discovered it in the Scriptures, and are finding Biblical prophecy bursting with meaning now. If you haven't taken a look at it, it is time you did. Write or call us here at IPA to obtain some of the books and resources mentioned elsewhere on this web site. These will help you finally make sense out of Bible Prophecy without being taken for a ride by the date-setters.

Click here to order a FREE packet of information about the Preterist view with a list of our latest books and media (USA residents only).

What is the Preterist View of Bible Prophecy?
by Ed Stevens
Email: preterist1@aol.com
Website:International Preterist Association